President Joe Biden is announcing two new efforts by the U.S. Department of Agriculture at the White House Competition Council to support what he calls “fair and competitive meat and poultry markets.”

These efforts include publishing the proposed Inclusive Competition and Market Integrity Rules Under the Packers and Stockyards Act to protect farmers and ranchers from abuse, and a new $15 million Agricultural Competition Challenge to ramp up collaboration with the state attorneys general on the enforcement of the competition laws, such as the laws against price fixing.

“Highly concentrated local markets in livestock and poultry have increasingly left farmers, ranchers, growers, and producers vulnerable to a range of practices that unjustly exclude them from economic opportunities and undermine a transparent, competitive, and open market — which harms producers’ ability to deliver the quality, affordable food working families depend upon,” said Agriculture Secretary Tom Vilsack, who is a member of the White House Competition Council. “USDA is focused on building new, fairer, and more resilient markets, protecting producers, and reducing food costs, and we are proving again today that we will use all tools at our disposal to do so.”

»Related: A look at the Biden Administration’s agriculture policies and initiatives

The USDA is proposing these modernized regulations under the Packers and Stockyards Act’s provisions prohibiting undue prejudice, unjust discrimination, and deception to provide for clearer, more effective standards to govern the modern marketplace.

The Inclusive Competition and Market Integrity proposed rule would revise regulations under the P&S Act by prohibiting certain prejudices and disadvantages against covered producers in the livestock, meat, and poultry markets. The regulations would prohibit retaliatory practices that interfere with lawful communications, assertion of rights, and participation in associations, among other protected activities — such as retaliating against a farmer or rancher for blowing the whistle on price fixing.

The purpose of the rule is to promote inclusive competition and market integrity in the livestock, meat, and poultry markets.

The second of three priority regulatory Packers and Stockyards Act initiatives the USDA announced it would pursue, this rule, will soon be published in the Federal Register and made available for public comment. A preview of the rule is available on the Agricultural Marketing Service website. Once published, stakeholders and other interested parties will have 60 days from the date of publication to submit comments via the web portal. All comments submitted will be considered as the USDA develops a final rule.

Building on the Biden-Harris Executive Order’s “Whole-of-Government” approach, the USDA is also taking action to ramp up enforcement of the competition laws by challenging the state attorneys general to partner with USDA on competition issues in the food and agriculture space, using up to $15 million in funds from the Consolidated Appropriations Act.

Through a combination of renewable cooperative agreements and memorandums of understanding, these new partnerships will assist state AGs in tackling anticompetitive practices in the agricultural sector and related industries that are contributing to heightened inflationary pressures, lack of choices for consumers and producers, and conflicts of interest and anticompetitive barriers across the food and agriculture supply chains.

The USDA is working directly with state AG offices to solicit applications and requests for funding under this initiative and looks forward to these partnerships as we work together to secure America’s food systems.

Top Third Ag Marketing helps farmers become better agricultural marketers with the goal of marketing crops and livestock in the top third of prices. Mark Gold and his team provide AGDAILY.com with the latest information and a look ahead in their audio commentary. 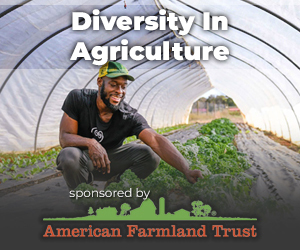 When it comes to adding carbon to the soil, all cover crops don’t perform equally, according to a team of researchers at Penn State University whose new study revealed the disparity for the first time.

The research — a collaboration between Penn State, Clemson, and Cornell universities — may lead to ways of sequestering more carbon in agricultural soils, according to study co-author Jason Kaye, distinguished professor of soil biogeochemistry in Penn State’s College of Agricultural Sciences. Agricultural soils comprise about a third of the global land surface, and soils are the largest reservoir for carbon on Earth.

With the help of plants and microbes, soils can take carbon out of the atmosphere and trap it in the ground, helping to mitigate climate change, explained Kaye, whose research group has been experimenting with cover crops for two decades. At the same time, he added, soil carbon is crucial for supporting plant growth because it helps create healthier, more fertile soils.

“I think we’re at a crucial point nationally where we’re thinking about sequestering carbon in agricultural soils and wondering if cover crops can be a key tool to do that,” he said. “There are a lot of questions about how much carbon could be stored, and which types of carbon. So, this research has really notable implications.”

To reach their conclusions, the researchers sampled soils under monocultures (a single crop in a given area) of cover crops belonging to three plant functional types — a legume (crimson clover), a grass (triticale, a cross between wheat and rye), and a brassica (canola), as well as a mixture of these three species. The plots were part of a long-term cover-crops experiment at Penn State’s Russell E. Larson Agricultural Research Center in central Pennsylvania.

The researchers measured two types of soil carbon — particulate organic matter and mineral-associated organic matter. The former is the carbon that comes mainly from plant material that drops to the soil and breaks down into small particles; the latter is the carbon that becomes physically or chemically bonded with soil minerals, like clay. Both processes involve bacteria and fungi in the soil.

Before this research, the relationship between the two types of soil carbon and cover crops was not well understood, the researchers said. Particulate organic matter is a relatively short-lived form of soil carbon, often decomposed by soil microbes in a matter of a few years. Although this means that it does not represent a long-term form of carbon sequestration, the decomposition and cycling of particulate organic matter helps support plant growth.

On the other hand, mineral-associated organic matter is a more persistent form of soil carbon that can remain in the soil for decades or even centuries. Increasing the amount of that type of soil carbon can help keep carbon out of the atmosphere over longer time periods.

The researchers recently published their findings in Global Change Biology, reporting that the soil organic carbon content was higher in all cover crops treatments than in fallow plots. Compared to the legume, soils under monocultures of grass and brassica had a higher proportion of plant-derived carbon in particulate organic matter. In contrast, soils under legumes had greater accumulation of microbial-derived carbon in mineral-associated organic matter.

The study results revealed, for the first time, that the cover crop mixture contributed to a higher concentration of plant-derived compounds in particulate organic matter, explained Ziliang Zhang, who spearheaded the study. As a postdoctoral scholar in the Department of Plant and Environmental Sciences at Clemson University when the research was conducted, he performed the huge volume of soil and data analysis involved in the study.

“Our findings demonstrate that including a diversity of crop types on farms is key for increasing both short- and long-term soil carbon,” he said. “This research provides farmers with an example of how they can build climate-friendly, fertile soils. And scientists need to identify strategies around this concept that strike a balance between helping plants grow in the short-term and locking away carbon for the long term.” Agrifood investment and innovation platform SVG Ventures|THRIVE and energy-company Shell have partnered to launch the Climate-Smart Agriculture Challenge, an initiative focused on identifying and supporting innovators who are driving the global transformation to decarbonize the agricultural sector.

Eligible participants in the Climate-Smart Agricultural Challenge will propose novel technologies and solutions with the potential to meaningfully reduce emissions in the agricultural sector.

You can get involved in the challenge here.

Shell plans to leverage THRIVE’s expansive global ecosystem of startups and corporate partners during the competition, and the challenge finalists will pitch their ideas to a panel of THRIVE and Shell experts in March 2023. At least one winner will be selected and receive up to $100,000 in seed funding toward developing a proof of concept of their solution.

In addition to initial seed funding, winners will be joining the Shell GameChanger accelerator in 2023. The winners of this challenge will also gain brand recognition through THRIVE media channels, and selected applicants will be given placement in the award-winning THRIVE Accelerator Program in 2024. In addition, Shell will explore opportunities for relevant participants to pilot their technology within Shell operations.

Decarbonization of the agricultural sector is critical given its position at the nexus of food security, energy use, and climate. Research within the agricultural sector is a focus of Shell’s nature-based solutions business, which works to invest in, protect, and enhance natural ecosystems that capture carbon dioxide emissions, benefit local communities, and improve biodiversity. More sustainable agricultural practices and farming techniques that store carbon in soil can deliver emission reductions and have the potential to generate high quality carbon offsets credits.