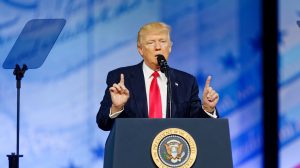 President Donald Trump, for the third year in a row, will address farm and ranch families at the American Farm Bureau Federation’s 101st Annual Convention. Partners in Advocacy Leadership members were tasked with creating a short video about their participation at a media training in New York City this summer. Farm groups are calling for a swift resolution to the ongoing trade war between the U.S. and China, in addition to open markets, for American farmers. In case you missed #AFBF18, here is a roundup of some of the best images from Twitter! After President Donald Trump’s proposed “A New Foundation for American Greatness,” budget was delivered to the Hill Tuesday, several agricultural groups spoke out against the $46.54 billion cut to agriculture subsidies over 10 years. Here’s what some groups had to say … National Corn Growers Association: “The time and place to debate farm bill programs […]

The importance of the coffee shop to a farmer